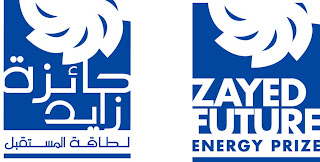 US$4 million to be awarded for innovation, leadership, long-term vision and impact in renewable energy and sustainability

Zayed Future Energy Prize, the world’s preeminent award for innovation and development of solutions for renewable and sustainable energy, has announced that nominations are now open for the 2012 global competition. Nomination forms and registration are located at www.ZayedFutureEnergyPrize.com.

“By honouring thedevelopment of new technologies, and their market adoption, our goal is to play a unique role in advancing energy security and sustainability around the world,” said Dr. Sultan Ahmed Al Jaber, Director General of the Zayed Future Energy Prize. “We invite the global energy community to join us in recognizing outstanding achievement by submitting nominations for the 2012 competition.”

Submissions will be judged on four main criteria: Impact, Long-Term Vision, Leadership, and Innovation in the following categories:

· SMEs & NGOs. Nominees will have made a clear impact, either through disseminating a particular solution in the field, furthering knowledge, awareness, policy development or through technology. Three prizes will be awarded: US$1.5m to the overall winner; US$1m to the first runner-up; and US$500,000 to the second runner-up.

· Large Corporations. Nominees will have exhibited business success and leadership, as well as a clear vision for the long-term future of energy, and a coherent, sustainable strategy for its own role in this future. The winner will receive a Special Recognition Award.

· Individual Lifetime Achievement.Nominations are open to individuals from academic, political, technological, business or other fields in renewable energy sustainability who are identified leaders and committed to raising awareness and supporting energy policy development. The winner will receive US$500,000.

Also, in a move designed to signal the on-going development of the Zayed Future Energy Prize, a fourth category will be introduced in 2012 – an International High School Education Competition with a prize purse of US$500,000 to be first awarded in 2013.

In the last three years, nominations have increased from 204 in 2009, to 959 in 2011, as recognition of the value of the prize continues to grow globally. Past winners have included: Toyota Motor Corporation, for the Prius electric-hybrid vehicle; Vestas, a Danish manufacturer of wind turbine technology; and a Bangladeshi entrepreneur who brought solar energy technology to two million people in rural communities.

Nominations forms and guidelines for submission can be found at www.ZayedFutureEnergyPrize.com. In the SME/NGO and Large Corporation categories, companies may self-nominate. However, in the Lifetime Achievement category, candidates must be nominated by a third-party. Nominations will be accepted through August 22nd. Winners will be recognized January 17, 2012, at the Awards ceremony to be held in Abu Dhabi.

About the Zayed Future Energy Prize

The Zayed Future Energy Prize honours the legacy of the late Sheikh Zayed Bin Sultan Al Nahyan, Founding Father of the United Arab Emirates, who championed environmental stewardship as an integral part of UAE history and heritage.Managed by Masdar, under the auspices of the Abu Dhabi government, this annual award celebrates achievements and leadership in renewable energy and sustainability and in doing so, aspires to educate and inspire future leaders and innovators. For more information, visit: www.ZayedFutureEnergyPrize.com

ssandhu@masdar.ae
Posted by Khaleej Dailies at 10:58 AM